Slicer does not work for my PC. So, I found another program. But it doesn’t make a full 3D image so easily. You have to go through the slices and compile it yourself. So I feel like some areas aren’t filled in. 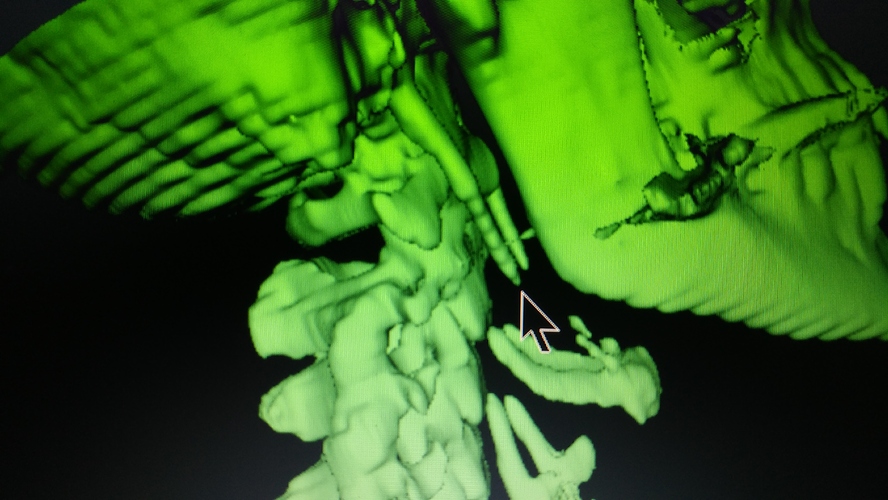 Hi! Well this is a good start! If it’s to scale then they are pretty close to your hyoid bone! Isn’t it nice to see the images for yourself? No “Feud” there!

Yes, ma’am. I believe so. I think my rendering is missing some bone in that area, too. I think I did see a bit of attachment between the hyoid and styloid on the right side when I was messing with the program. This gives me hope that someone will finally believe me. Getting better is my focus! 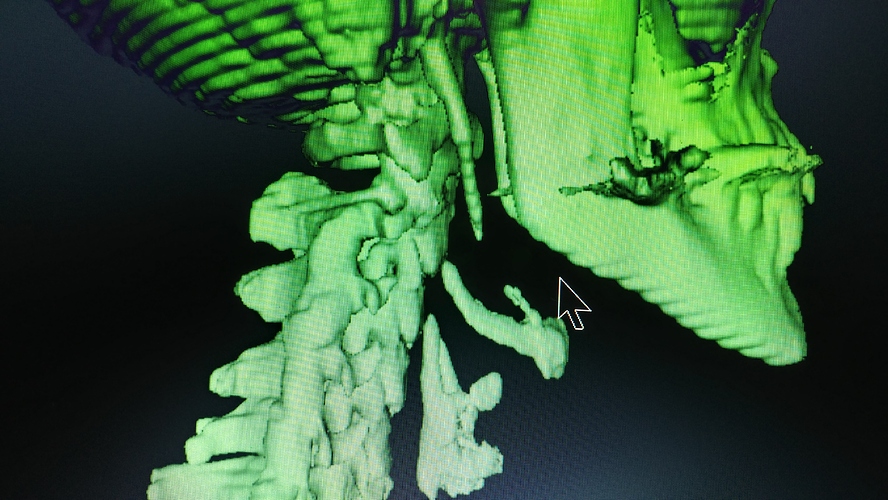 You are one step closer, gal!

They look elongated/ calcified ligaments from those images. Obviously we’re not doctors, but if you look at ‘normal’ length styloids & compare them to yours then you can see they’re longer.

Hi Red!
I think you did an amazing job compiling the 3D pics! Your styloids definitely look elongated & the projections coming off your hyoid bone would be partial calcification of the stylohyoid ligaments. You’ll need a professional radiologist to acknowledge this on paper for you to be officially diagnosed but GREAT WORK on your part for putting these pictures together.

I’ve read that measuring the styloids can’t be done accurately from a 3D picture, but the radiologist who read your initial CT scan should be able to go back & measure both styloids & comment on the s-h ligament calcification to update your report.

Jules - they are rather thick when looking at them head on. I just read a case study on a man whose styloid grew wider over a five year span. Hard pass for me.

Isaiah_40_31 - I will be asking for a CT with contrast next. The program I found allows you to put your skin, tissue, and vascular system on in layers. From what I’ve seen, and from what I’ve studied about this so far, I believe I am seeing some vascular compression. I believe that is where my pounding pressure headaches are coming from. I am also experiencing some general confusion and even had some speech issues a few days ago. As soon as I have the CT done I will be consulting with one of the physicians listed here. Thanks again for the words of encouragement, guys.

Hope you are all doing well.

I’m so excited for you. This is the part of the process where hope and determination start to grow!!!

Pounding headaches can definitely be caused by vascular compression. Speech issues are more likely from nerve impingement. But as everyone is saying (in essence), "YOU GO, GIRL!! "You’re doing good work on your behalf. it will pay off!

Hello, all. Update: confirmed diagnosis from my local ENT with the CT scan, without contrast, from December. No measurements were taken, however. She asked to refer me to Vanderbilt in Nashville. I glanced at their department, and no ES experience. Nope. She seemed glad to be rid of me.

So, with all this excitement, I got another diagnosis!! Somewhere in my travels I picked up a tapeworm. Barf. I’m having some possibly serious digestive issues and liver enzymes are up from the anthelmintic. This will need to be dealt with before anything happens with the ES. As always, I am so appreciative of this group and the wealth of knowledge and information contained within. Reading the posts from the members here inspires me and gives me hope. Hope all are doing well, and fighting the good fight.

On a side note, I read here that my vagus nerve might have been damaged or irritated by my ES. I have had digestive issues most of my adulthood. The prospect of being symptom free is a bright, white light at the end of this long tunnel! Amazed at this site.

Tapeworm? Just, no.
Argggghhh…oh well. No time for temper tantrums. You got this. One thing at a time.
There was a guy in Chattanooga that I was going to see. “St.” Something? I can’t remember how much ES he’s done but there’s the argument whether a good head/neck surgeon can just get in there and kick some butt with taking out the dang things.

Guess my love of raw fish and meat caught up with me!

Someone around Nooga, you say? Worth a look see, I suppose. Good to hear from you. Hope you’re doing well!

Hey Red!
WOWEE KAPOWIE - a tapeworm, eh! I hope it wasn’t in there too long! Glad we have ways of getting rid of those hitchhikers more easily now. Too bad your “eagle” can’t take care of that worm for you!

You probably know that there was a time long ago when capsules filled w/ tapeworm eggs were sold as weight loss supplements. People who took them got very sick or died

because their tapeworm infestations were so severe. Someone finally figured out

those capsules were a bad idea…DUH!! Hoping your anthelmintic works quickly. (I’m a sushi lover, BTW, guess I better watch out!).

You really don’t need to get a CT w/ contrast unless it’s to quench your own curiosity. I know for sure Dr. Samji won’t even look at them, & I don’t think Dr. Cognetti cares one way or the other. There are some differences in surgical strategy between the two doctors but both have been reasonably successful in treating ES. We’ve added a third to the list of most experienced ES surgeons in the US - Dr. Milligan in Phoenix. We’ve been told he’s done as many ES surgeries as Dr. Samji.

Regarding your side note, vagus nerve irritation is a very common ES problem. The vagus nerve can affect the gastrointestinal system, heart, anxiety levels, & other things. You can Google it to get the full scoop. I think mine was irritated, but I had heart symptoms. Veddy interestink…

Praying for you to be well soon!

Poor you! Hope you get rid of it soon…
Second what Isaiah says- if you’re thinking of seeing Dr Samji probably not worth it. We’ve updated the Doctors list so have another look in case there’s new additions in your area. And as Sewmomma says, skull base/ Otolaryngologist/ head and neck surgeons could help, but if you can travel, fair enough.
Glad that you’re being so positive & hopeful!