Below is a link to a YouTube video which discusses & partially shows the decompression of IJV compression in a person who has Eagle Syndrome. In this case, the elongated styloid process was not at fault for the compression. I am providing this information because we’ve had several members who have had IJV compression which was assumed to be caused by styloid elongation, but in the end, the cause of the problem had another source, & thus, styloid removal did not allow the IJV to re-open.

If you have been diagnosed with IJV compression, it may be worthwhile to visit a vascular surgeon/neurosurgeon as well an ENT or Head/Neck surgeon to try to ascertain the cause of your vascular compression prior ES surgery. In some cases, the true situation won’t be visible until the patient’s neck is opened & the IJV can be seen & cause of constriction assessed. Additionally, I now believe it is a good idea to consider having a vascular &/or neurosurgeon work alongside an ENT or Head/Neck surgeon in cases of vascular ES where styloid impingement isn’t clearly the problem.

WARNING - The video contains graphic visual information as well as a verbal description of the surgery. It’s about 8 min. long. 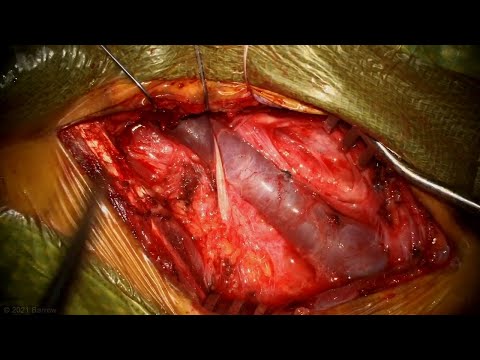 Thank you to @TheDude for sending us another VERY HELPFUL link.

I saw ENT today who said I had slightly elongated styloid (3cm) and calcified ligament but she wasn’t comfortable doing surgery.

I expect Dr. Hepworth would be willing to see you for evaluation at the very least. He tends to send his vascular ES patients off for further evaluation. Just make sure if you do end up seeing a vascular doc that you make sure you’re tested with your head in the provocative position & not in neutral. You can ask Dr. Hepworth or whoever refers you for that to be part of the the testing order.

I’m seeing Dr Hui, a NS at hopkins as well in a month. They mentioned he may order a CTV and talked about doing it in different positions I believe.

If Dr. Hepworth says you should see a different doctor but doesn’t have a referral, and you can travel, Dr. Omlie in MN may be a viable option. He’s the vascular surgeon who performed my surgery for vascular eagles. Good luck getting treatment and questions answered!

Thanks for this Isaiah! Also adding to my list to watch.

That was cringeworthy to watch, but really educational!

I see Hepworth and he has diagnosed me with the jugular compression type. He seems knowledgable and on task.

That’s great news nnaeve! I hope you’re able to have surgery soon so you can begin healing.

Great information! Thanks for sharing!

It’s unclear what Dr. Lawton does. He has not been willing to help any of our members who have contacted him recently. He has very narrow parameters for determining what is ES & what isn’t. People w/ CT scans & clear ES diagnoses have been turned away.

You are certainly welcome to contact him, but he hasn’t been added to our list because no one here has seen him for surgery. The video was posted as additional information regarding a particular case of vascular ES where an “outside of the box” surgery was performed to correct the problem. Dr. Lawton did not end up removing that patient’s styloids. It is clear that he fixed the cause of the jugular compression but unclear if that patient will go on to have future problems w/ ES because Dr. Lawton left the styloids in place.

Here is a link to the posts by recent members:

Dr. Hepworth is my daughter’s doctor. He did her sinus surgery and multiple CSF leak repairs. Since her LP’s were still showing high pressure he continued the investigation and found Eagle with jugular compression. We were just informed about it yesterday and were told that the surgery would involve a vascular surgeon and neurosurgeon as well.
We’ve heard from hospital staff that he’s the best and patient’s worldwide come to Denver for his expertise!

I expected as much ie that Dr. Hepworth is your daughter’s doctor. I’m so glad to know that! I hope her surgery helps bring normalcy back to her life.

I had bilateral ES & needed 2 surgeries. Most surgeons won’t do bilateral ES surgery in one fell swoop. I hope she doesn’t need a second surgery down the road but if she does, you’ll all know what to expect from the first time around.

I’m not a big fan of “Caring Medical” and their prolotherapy stuff, but this video about ultrasound measurements of IJVs might be worth watching.

I have some big problems with this video…first measuring the jugular in an upright position is perhaps not super meaningful in the first place because the vein should collapse somewhat with flow diverted to the posterior circulation. Second, a more likely cause of the effect seen with the neck weights (if it’s even reproducible) is compression of the vertebral veins redirecting flow to the jugulars rather than any cervical alignment changes. I previously overlaid someone’s radiographs from a different chiropractor with and without the neck weights, and there was zero detectable change at the C1 level. And whatever point he is trying to make at the end about an osteophyte causing compression doesn’t really make sense…it’s not in contact with the jugular. Just more misinformation dressed up as flashy clickbait from caring medical in my opinion…

Very possible.
One thing though that I find logical, is that based on the neck posture/position, the collateral flow and esp. vertebral venous plexus (valve-less veins) might experience different compressions and different flow volumes, thus requiring more engagement from the IJVs.

The thing is that it’s probably extremely difficult to calculate collateral flow volume, because… There are just too many collaterals overall.

I agree with nature’s findings re postural difference, though I hypothesize that if one has affected collaterals/vertebral venous plexus, the IJVs start being more involved in upright posture too.

Upd: “very possible” as in "I mostly agree with @coldbear "

Yes, there are a lot of variables involved that make it ripe for a real study with large sample sizes and proper statistics. These videos just really bother me when they use unscientific methods that conveniently fit their narrative, without mentioning or considering alternative or confounding mechanisms. I’d give them a bit more benefit of the doubt if they weren’t hawking expensive unproven therapies. Just my $.02 tho!

Even supine, my occipital emissary veins seem to take a ton of the flow with the left one almost the same diameter as my dominant jugular where it leaves the skull. Strap some weights to the back of my neck, and it wouldn’t be too surprising to see flow redirected. 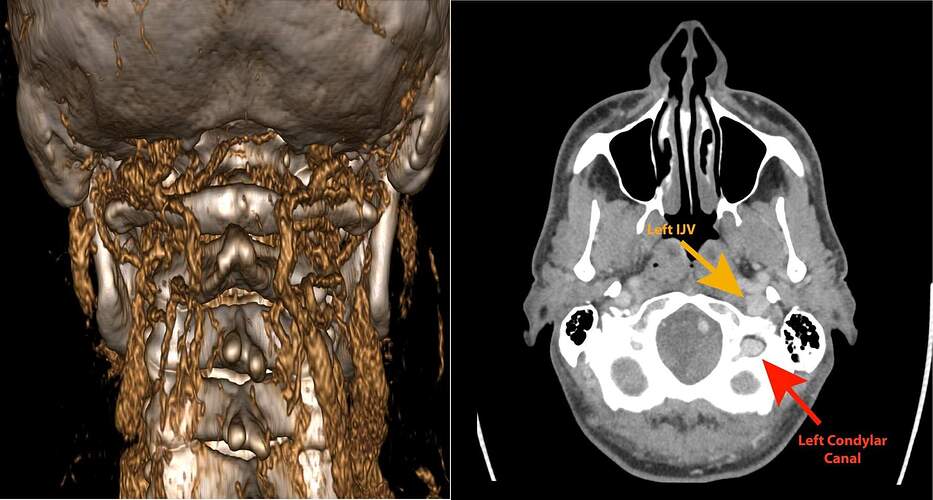 Edit: P.S. not arguing with you at all @vdm , in case it sounds that way. I know we are on the same side here

Absolutely. Based on the original this topic’s video, the IJV is extremely easy to compress and deform. I was surprised the surgeon so confidently pulled/pressed it with the instruments. Probably the tissue is quite strong even for those thin walls.

The video I posted - yep, the point I wanted highlight that even in upright posture there are multiple possible “compression” levels as demonstrated using US, even if that’s not very scientific experiment. It might explain for example why I always preferred looking at the monitor “up” with my neck extended rather than how the “ergonomists” suggest - slightly down. I would feel it not only painful, but also couldn’t properly concentrate. Maybe my collaterals weren’t as good and I always relied on slightly opening up the IJVs while sitting and working

Who knows. Too many variables. Using a scalene muscle to keep the shoulder up vs using rotator cuff muscles probably might make significant difference alone in all the circulatory system.