What they took out of me

Here is a pic of what they removed from me on Monday. I explained last time that one of my surgeons is a friend of mine. He works on sinuses so he has had their neck surgeon be the primary surgeon for this but he has assisted both operations. He is a very good guy. 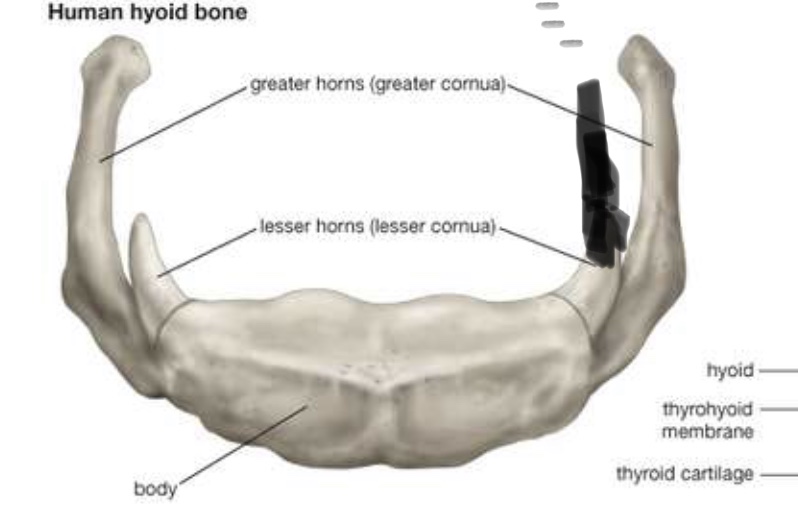 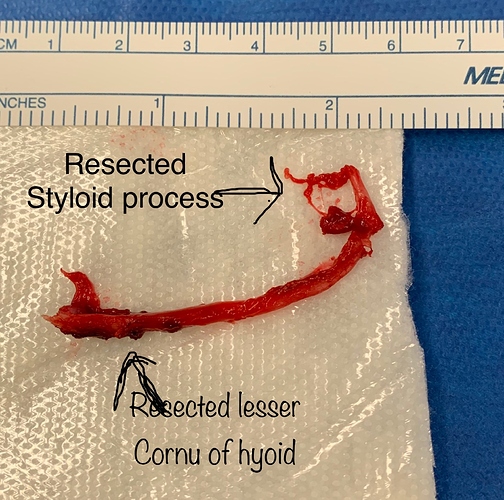 Unusual, but I think that’s the same as Sewmomma’s surgery, hopefully she’ll chip in! How great to have a friend assist to operate on you!
Hope you’re healing well still?

Hi! I love your picture! Absolutely this was my story. Although…to my knowledge, I’m not aware that the actual cornu of the hyoid was cut out in my case? Here is the what the surgeon said before the surgery: Resection will begin at junction of stylohyoid (SH) ligament and lesser cornu of hyoid bone.
I’m writing it on my list for next time to ask him how much of the cornu came with the ligament.

Good, then I’m not the oddity that they think I am! They just thought it was so unlike the other side. He said when someone has an issue on two sides they expect them to be similar. Basically, I had classic on my right that caused me great pain and vascular on my left that gave me dizziness and weird head sensations. I think Jules was similar to that.

I go around in my head about the same thing! Is it a ligament, is it a styloid - it’s Superman!!! Old school Superman line for ya.

Here was the one taken out 3 years ago 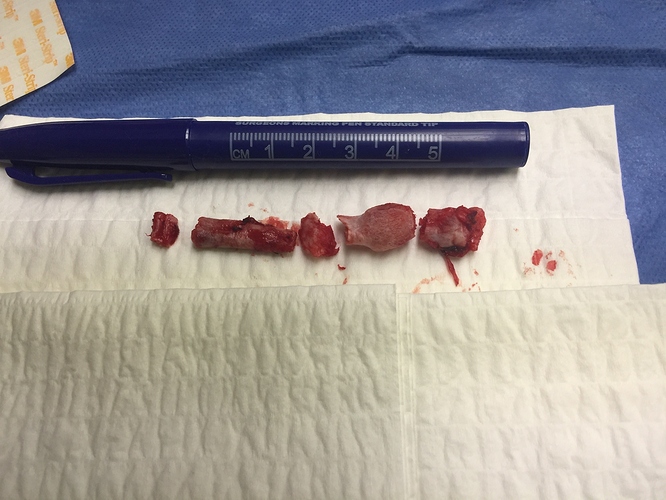 I had classic ES to start with, no vascular symptoms just neck & ear pain, then the vascular symptoms started later, but both sides did compress the jugular veins & both were over 4cms. I didn’t have any calcification of ligaments though, so different to you. Interesting how different yours were!

8 days post op here. I was able to play all my masses this weekend. The nice thing is I’m way up in the choir/loft so only the choir sees me. I have facial pain especially if I try to sleep lying down. I think the swelling rests on my nerve in that position.
My first bite is a lot worse than last time but I might have stumbled onto something that helps. I woke up with my wife’s cold this morning so I started to suck on a zinc drop. When I went to chew the last little remaing piece there was no pain. I wonder if you put a tic tac in your mouth before you eat if that is enough to get salivary glands working but not cause pain when you bite?

My dentist looked at my picture yesterday and said he thought you could clearly see the white part was the styloid, then it had a lump and turned to black/red and he thought it was where it changed to the ligament. . .

Sorry you’ve gotten your wife’s cold. No fun when you’re already not feeling perfect. How wonderful that you’ve gotten back to playing the organ so quickly after your surgery! I had to sleep w/ my head very elevated for a couple of months after both of my surgeries or my throat would feel like it was swelling closed & my neck would hurt from the swelling. I’m sorry you’ve had FBS on both sides. Fortunately I only had it on one side but it hurt enough to cover both!!

That’s a very interesting observation about the zinc lozenge. I may try your suggestion. I have found that keeping myself very hydrated helps my FBS symptoms be substantially less severe than when I don’t drink enough over the course of a day. Thankfully, the symptoms are much, much less severe now than when FBS first started for me.

I went back and looked sjlash and I see what you mean about a lump. Interesting to see it all connected like that. You gave birth to quite the baby.

You are a devoted musician. I’m sure the choir of angels in heaven enjoyed it as much as your parish did.

Great that you’re back to playing again, I’m sure you were missed! Hope everything settles soon…