Are there any other potential diagnosis?

Hello again!
I have clear bilateral elongation of the styloid in my panoramic X-ray. However, it still looks quite different from a lot of the imaging I’m seeing. Mine is very pointed, crooked and it almost looks as though there’s additional splinters growing next to it off of the skull- This is on both sides. Is there any other kind of disorder or disease that can account for this? Or is Eagle syndrome the clear culprit? Is it just a bad x Ray? I’m wondering because the dr that first suggested Eagle syndrome seemed hesitant because of the appearance of it. I am working on getting into a doctor that knows a bit more about this but it’s going to be complicated. In the mean time, I’m of course a little freaked out and trying to understand what the heck’s going on. I know you guys aren’t drs but if you’re aware of anything else that’s similar I’d love to know.
Thanks!
Jenn* 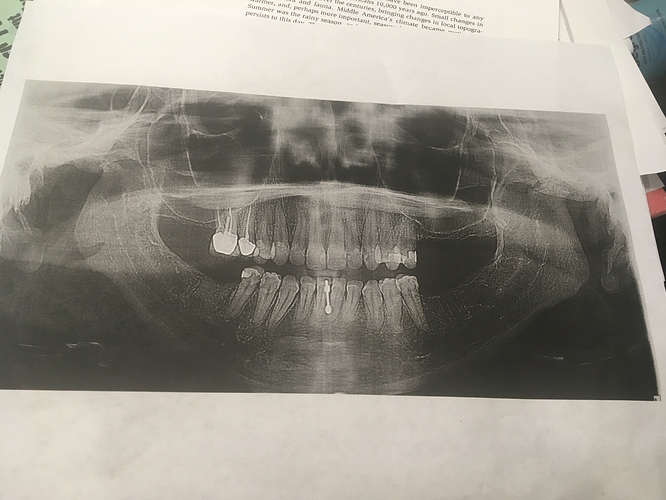 My back teeth are all missing due to a terrible injury I sustained years ago by the way!

Like you said, we’re not doctors…the styloids certainly look angled & pointy enough to potentially give symptoms…can’t say about the splinters you mention, I don’t feel that the xray is clear enough.
I’ve not heard of anything else which could cause splintering- lots of members have had bone spurs on other bones like in the neck, there seems to be a link, but only what we’ve noticed, haven’t ever seen any research on this except mentions of metabolic disorders as a potential cause. Was there a radiology report with the xray? Just wondered if there was any comment with it, or exactly what your doctor thought about it? I have to say it might be worth getting a CT done as this might show things clearer, I would guess that maybe another doctor would want that with a referral?

I agree about the x Ray not being clear. It also looks different when looking at the actual x Ray film. I have a huge crack in my jawbone that isn’t even visible in this x Ray copy (from a previous injury). Ill look up the bone spurs connection. My biggest concern is how quickly my symptoms have been progressing and how loooong it has taken to get help from doctors. Thank you again Jules for your response!

I would agree that further imaging is needed, especially with your complicating history. Bone spurs develope in relation to stress to any given bone…and your jaw and facial bones have seen more than their share! With the dynamics of your jaw without the condyles it is not surprising that things are looking very different and then muscles will have had to adapt dramatically. Were you able to contact your original maxillofacial surgeon? Best to you!

I go to see him next week!

. So happy I was able to get in so quickly. Hopefully he’ll have more answers for me. I’ll keep you guys updated!

I have incredibly bad luck when it comes to having weird stuff lol. I have bilateral SSHL which is extremely rare- I had a condylectomy in my early 20s (again, highly unusual)- and now this. I’m just wondering what’s next on my list of completely strange things. Im only In my 30s! This weird luck has been lifelong too. I had a form of valley fever as a kid that became systemic and caused scar tissue in my eyes. Cmon universe you’re gonna have to cut me some slack!

Jumping back to your earlier post, x-rays & even CT scans sometimes contain what doctors call “artifacts” i.e. images of things that aren’t there or are of no consequence. It is possible the splintery looking stuff you see falls into this category. That said, I do agree w/ JustBreathe - you’ve had severe jaw injury & the body does tend to lay down extra calcium, sometimes in place of repairing soft tissue, in order to strengthen what’s been damaged. This may have been your body’s response to your jaw injury. Additionally, it is also the cause of your styloid elongation. Many of our forum members have had head or neck injuries w/ ensuing Eagle Syndrome diagnoses some years later. Though we can’t prove these injuries caused ES, there does seem to be connection.

I sympathize w/ your SSHL diagnosis as I have Meniere’s Disease which resulted from a head injury from a cycling accident in 2015. My left ear still has some hearing capability but it’s much reduced.

Glad you have an appt w/ your maxillofacial surgeon. You may be able to educate him about ES with what you’re learning from here!

Have you ever heard of ES causing SSHL? I literally never got an answer as to why it happened (just the lovely idiopathic title). There is no hearing loss in my family it definitely seems possible that ES could cause this as it goes through the nerves in that area. As you probably already know, the SSHL is caused by some kind of damage to the auditory nerve system. Though my hearing is gone, it would still be kinda nice to have a reason for it, especially if there’s anything I can do to rescue that 20% hearing I have left.

I’m sorry about your Meneires- I have a friend who has this and the episodic nature of it is hard— she never really adapts to it because it cycles.

A number of people have mentioned hearing loss as a symptoms of ES & in some cases, hearing has improved post op. I have not heard of ES causing SSHL specifically, though I agree, anything is possible w/ ES because of the number of cranial nerves it can affect. There is a very small chance that having your styloids shortened or removed could take pressure off whatever nerves have been damaged & allow for you to regain some hearing. That is a long shot though.

My Meniere’s symptoms were under fairly good control for about 3 years. In July of last year, I started having monthly symptoms & having to treat myself w/ high dose prednisone for a week at a time. By Jan. this year, it was out of control completely so I had surgery in Feb. to have an endolymphatic sac shunt placed in my inner ear. This is one method used to try to stop Meniere’s symptoms & preserve hearing. I misunderstood & thought it would totally relieve me of symptoms, which, by & large, it has. However, I still have to be very cautious w/ my salt & caffeine intake, & I take a daily diuretic to help w/ inner ear fluid balance. I was very blessed to not have the huge problem w/ vertigo that many people have associated w/ Meniere’s.

I’ve never heard of the shunt treatment for meneire’s- I’ll have to let her know about that. She is extremely skeptical of medication and as far as I’m aware, seeks to control it through diet mostly. At least once a month she’s down for a week though with, as you said, severe vertigo, tinnitus and hearing loss.