Attached is a picture of my fragmented calcified Styloid processes. Back in February this year i had surgery to reduce them. The surgery was a success and I felt great for a while. About a month or two back i felt a sharp stinging in my neck and heard a loud POP sound. It was so loud I could hear it through my Throat and out of my mouth. Since then I have been having strange symptoms such as: Tingling numbness of hands legs and feet, Facial swelling, Eye pain and redness, Double/ghost vision, Fatigue and tiredness, Stomach pain diarrhea, daily headaches, mental fogginess, panic attacks every other day, and Sleep paralysis and sleep Adrenalin rushes. Anyway after dozes of Dr. Vists many MRI,CT. I ended up back to the source of it all bone fragments reeking havoc once again! I will see the ENT again soon with a game plan on what we are going to do and let yall know. 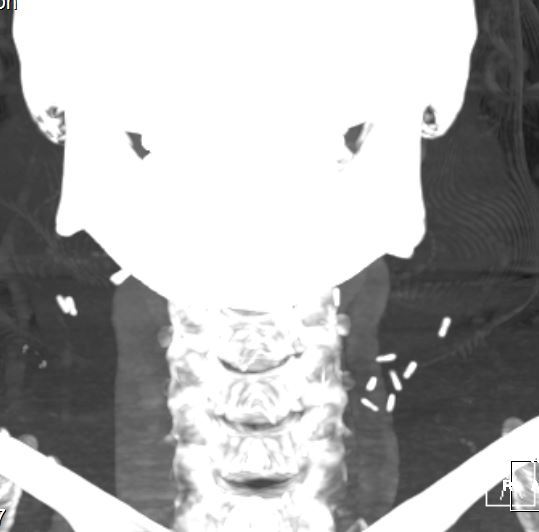 Oh my god. I just had surgery Monday where they took out 2 cm and the surgeon acted like that’s the end of issues for that side. This happened less than a year later for you?? How can the other pics be viewed? The left bone just broke apart by itself???

Yes it just broke with simple movement! I had my surgery in Feb this year and also removed 2cm on each side. I thought it was over as my neck pain and other symptoms were gone. Then months ago it got worse. The other pictures I attached are simple JPGS you can view them within your browsers ( i and view them with google chrome) If you feel any other neck discomfort I would request a second CT w/ contrast scan and demand a CD copy just as a follow up precaution. It's possible that you may never experience what I am going through I would just opt to get them fully removed if you have the initial option.

mt83, you did a great service by posting this. I now am of the firm belief that you need to get as much taken out as possible in the first surgery. I'm aware of only a couple doctors who seem to understand this. I didn't have anything as dramatic as your situation, but I've been in misery for several years trying to get the rest of my left styloid taken out.

I hope you can get this taken care of. Good luck and please keep us posted on how you're doing.

I had my entire styloid removed- 4.5 cm. I have these small bits as well. Spoke to surgeon and they are vascular clips, not bone fragments.I only have about 4-5 of the clips. They are titanium so they have the same signal as bone or metal.

Thanks for posting this, I am in similar situation, all the same symptoms as you, had a reduction not long ago

guys i might be wrong here i took this image to a local ENT he said they could be medical braids ..

Roger that kitty ill take them down to reduce scare factor- my fault.

I had my entire styloid removed- 4.5 cm. I have these small bits as well. Spoke to surgeon and they are vascular clips, not bone fragments.I only have about 4-5 of the clips. They are titanium so they have the same signal as bone or metal.