Was wondering if anyone had any insight into this. I’ll start off with what I’m feeling. It’s all relatively mild, so I’m not too worried, but still something I’m keeping my eye on.

It feels like there’s liquid or air bubbles stuck in my left lower cheek. If I had to point where it was, the eustachian tube describes it best.

Whenever the pressure builds up it feels like liquid is moving through it and eventually I get some post nasal drip.

I also have some air fullness and it sometimes feels like there’s liquid coming out of my ears.

Now interestingly enough, I think I actually had some of this before my recent surgery. So my first question is if anyone has heard of es causing eustachian tube dysfunction?

My other question is if anyone has seen this from post surgical swelling, especially if you had ear incisions?

For now I’m doing daily saline rinse and allergy meds, I’d imagine there isn’t much more to do other than give it time, I’m still very early from surgery but I’d like to learn more about this so I’m prepared if need be.

If I’m not mistaken, @tp12 had similar issues with ears feeling “clogged” after the bilateral surgery? Not sure how she’s doing now… I hope it subsided?

I sincerely believe my ear troubles were related to my eagles too, but Dr Hackman kind of dismissed my feelings about. You still won’t convince me otherwise because I know it all coincided with me.

I also still have the things you’re describing, but it’s to a significantly lower degree now. my surgery was in August 2021 and I feel like the actual fullness did not go down until probably about March 2022. It is still there on a minor level, so I don’t know of it’s one of those things that will continue to improve?
I have the crackling and the feeling of liquid, but I’ve been to multiple drs who tell me there is nothing there, so I just kind of live with it at this point bc I can’t afford to keep digging medically for it, but I would say it is 90% improved now from where I was post surgery.

Yah I have a hard time believing this is completely unrelated to es or my recent surgery. But like you said, it’s not at a point where I would necessarily pursue anything drastic for it. I’ll see how I am in a few months.

There’s been a few discussions about Eustachian tube dysfunction, I did a quick search & found this one which you might find helpful, it mentions the chorda tympani nerve, a small branch of the Facial nerve (cranial nerve VII), which could maybe be a cause of some of your symptoms? Here’s a link:
Unusual ear symptom - General - Living with Eagle
It sounds a bit coincidental that you’re getting this after surgery, especially if others have had similar symptoms after surgery with Dr Hackman- hopefully it is irritated nerves and will settle with time.

@elijah I should be the last one commenting about post surgery issues but you just confirmed something I was wondering all along about your CT scan prior to the recent surgery. Indeed there appears to be what looks like air pockets (cyan circle on the image below - air pockets appear like dark spots on CT Scan) under your left mandibular bone. I really do not know how they got there. Was it caused by the surgery before the recent one or you had it all along, I can’t tell.

I, however, saw a number of people that complained about ear fullness after Hackman’s surgery. I think it might have been related to inflammation since his incision is high up under the ear.

Anyways something interesting to investigate further but it did predate the recent surgery as you have said it.

Cyan circle shows what appears to be air pockets (dark spots) trapped under the mandible (I could be wrong but it does appear that way). 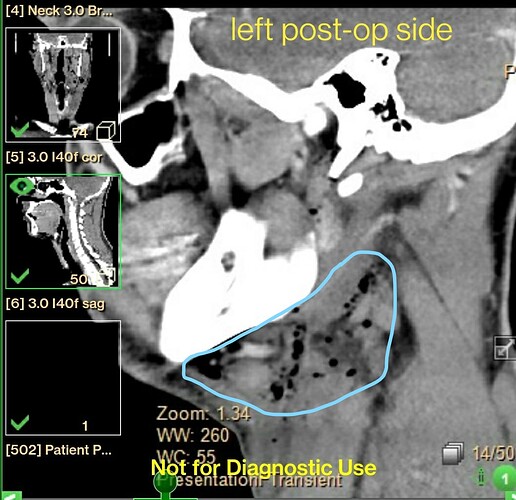 I really do not know how they got there

Interesting… From what I know, sometimes air bubbles in soft tissues occur due to the infection - bacteria produce gas bubbles that are trapped inside.

UPD: But now that I double checked, that is mostly for the bacteria that besides that would cause a zillion of other symptoms starting with fever: https://casereports.bmj.com/content/13/6/e233946

Interesting… From what I know, sometimes air bubbles in soft tissues occur due to the infection - bacteria produce gas bubbles that are trapped inside.

Yeah I agree they can be caused by those. There is also what looks like fluid of some kind (dark grey in the image ) in and around the air bubbles which potentially points to some kind inflammation/infection etc. Perhaps post first surgery inflammation but will see what Elijah says.

I believe that was from my first surgery. The CT scan was taken the night of my surgery and they made mention of it in the report:

“There is a small collection inferior to the left parotid along the superficial aspect of the sternocleidomastoid with small foci of venous enhancement, raising question of a small hematoma with venous extravasation.”

They did not give me a drain and I had considerable swelling and bruising along my entire neck and chest after that surgery so I believe that is what it the cause of it.

@elijah that explains it. So it appears hematoma (fluid) mixed with air bubbles was the result of the previous surgery. I thought the same and did not think it was worth of commenting on it before since you were focused on another surgery. Since you now mentioned air pockets and fluid, I thought I would mention it.

I really relate to that.

I started feeling it after I removed my orthodontic bracers and my bite changed, so I guess mine is caused by a combination of TMD and now maybe with eagles too.

My post nasal drip is always on the right, same side I feel the symptoms of lump on throat and whenever I raise my soft palate I hear this “explosions” in ear. Can’t distinguish if it sounds like air or bones, tho.

Wish you the best recovery, friend! Try going on a dentist too to eliminate TMD related problems.

Good to hear from you! Post nasal drip is a somewhat common ES symptom & since yours is one-sided, on the side where you feel your styloid, that’s most likely the cause. That is also the case w/ the “exploding” sound in your ear. Some members have complained of loud crackling sounds in their ear(s) when swallowing or w/ certain head movements. All these symptoms will most likely go away if you have your styloid removed. Even your TMJ symptoms can be caused or made worse by an elongated styloid. I would say don’t spend too much time & money on TMJ therapies until you have a styloidectomy as your worst symptoms may resolve just from that surgery.

I had surgery on April 24 of this year with Dr Hackman and I am having the same issue. I still have the ear fullness and the first bite or sip of something feels like cool fluid is dripping out of my ears. I was also having first bite syndrome after surgery but luckily that has subsided. I am still having burning and numbness of my tongue which is unfortunately spreading to my lips and upper palate. I was hoping this was caused by the ES and would have been solved with the surgery since it was the last symptom to develop. I have severe craniocervical instability which I believe was actually made worse with the removal of the styloids which probably explains why the burning mouth is getting worse. It’s so hard trying to figure out what is causing what.

So sorry that you’re still having symptoms @Sula64, that’s really tough. It’s especially hard when people have several health conditions to know what’s causing what symptom, sometimes it’s a journey of trying different things to get yourself as well as you can, but accepting that maybe not every symptom will be resolved with the ES surgery, sadly. Thinking of you & sending you hugs

I’m preparing the pre-exams to proceed with the surgery and then I’ll update it! Both my sides are with odd symptoms in the ears. Guess I’ll have to take 'em both.