Do you see anything remarkable on my CT scans? 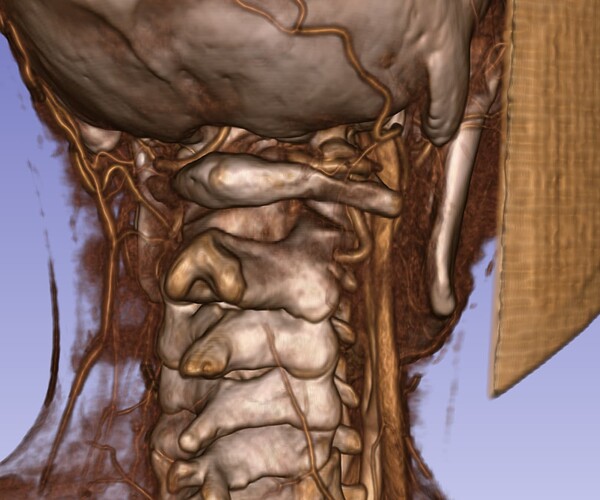 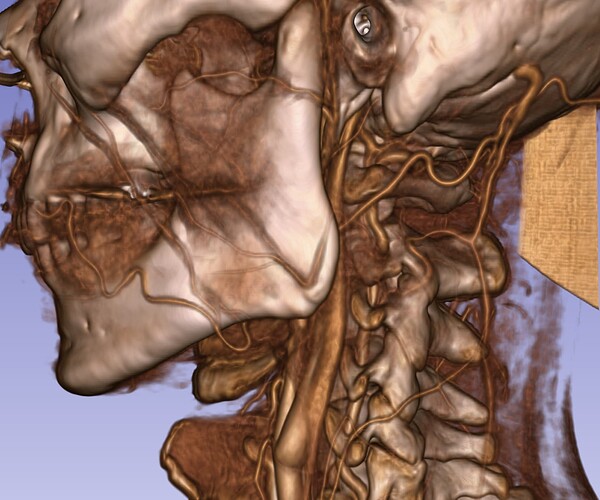 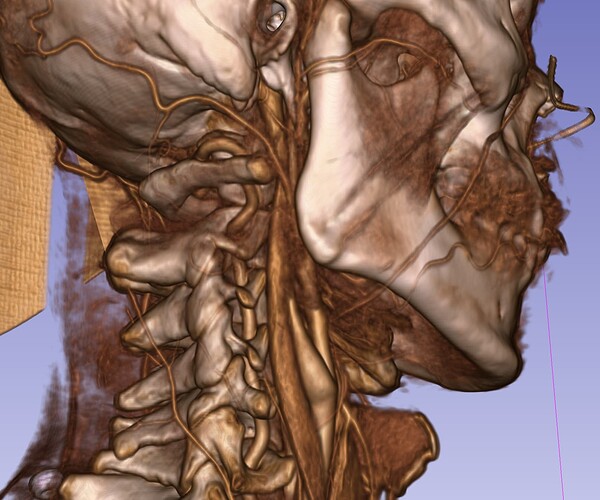 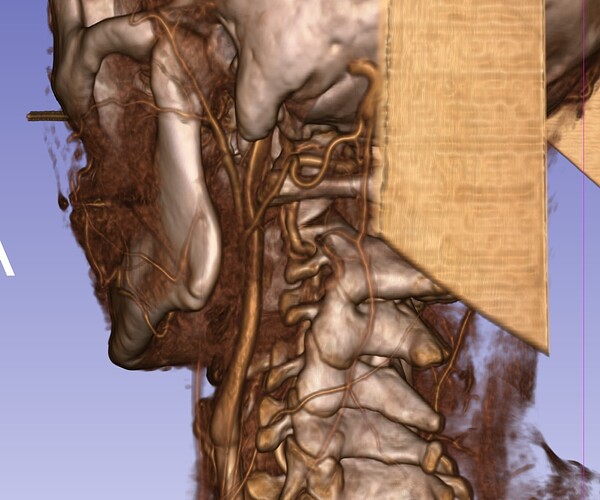 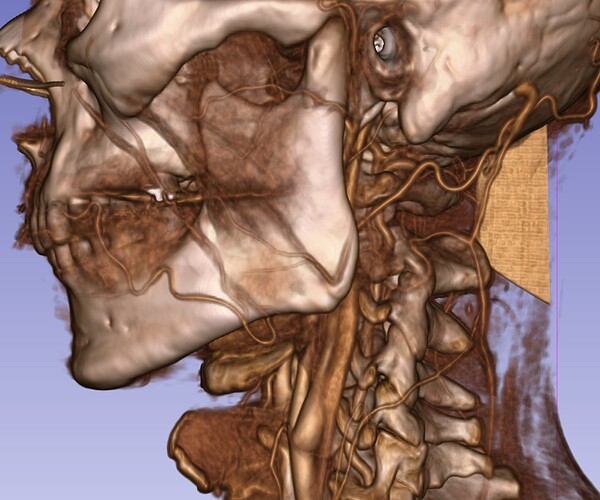 My jaw is set very far back as you can see, which I think is what is causing my issues. It’s not elongated styloids per se, but I think my issues are from the same region as many vascular ES sufferers. 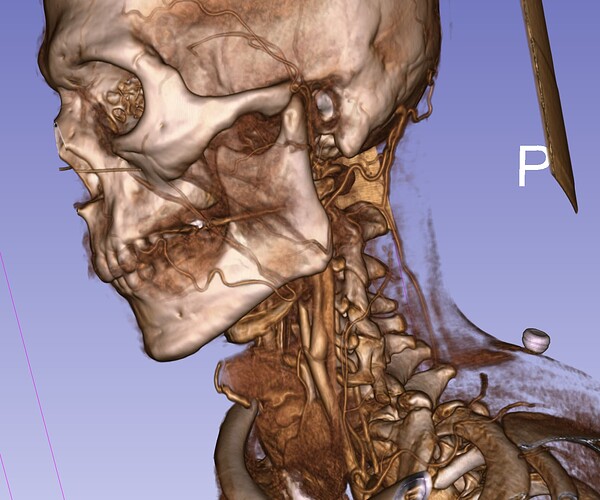 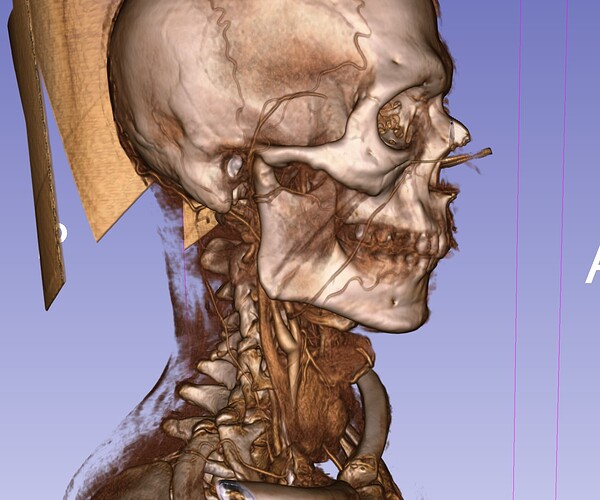 I suspect if you went for flexion/extension xrays, you’d might find that your flexion range is very limited.
It feels like the C1 is trying to compensate a lot and thats. Why the head is in “nod” position but the rest of the neck is curved in extension.

Disclaimer: not a doc here.

Chiropractor said flexion/extension ROM were both normal. Here are the X-rays: 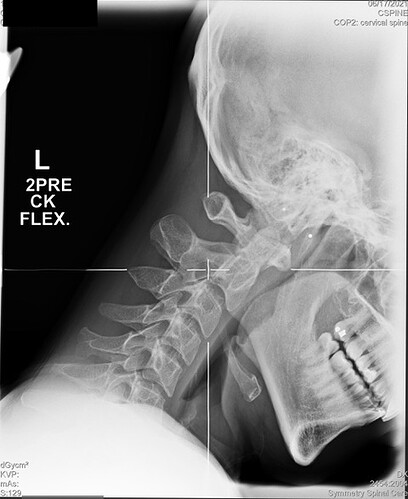 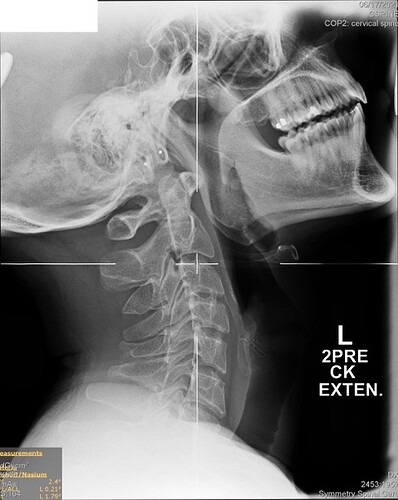 You’re right. Flexion is great. I wish mine was like that!

I’m sorry to say I can’t see enough of your styloids to comment on whether or not they look elongated, thick, pointed, curved, etc. They’re lost in the vascular tissues. I understand now why some doctors prefer CTs w/o contrast. I’m sure a more trained eye could give you better information. I can’t even see them in your x-rays below. That just goes to show what a novice I am at these things.

You commented on how far back your jaw is set. Do you feel your lower jaw position changed after your car accident i.e. it shifted back toward your neck? If so, it could make some sense that you jaw itself is causing some sort of vascular compression, but I would expect it not to be all the time just when your jaw is in particular positions…

I definitely think it’s jaw causing vascular compression. Some days I feel it is further forward (figure that one out) and my symptoms are much improved. It’s all a huge mystery to me.

@CJsBattle Not a radiologist here but it seems to me that your left Hyoid bone might be touching/compressing/irritating one of your Carotid arteries as it lies in the Carotid bifurcation (where the Carotid artery separate into Internal Carotid & External Carotid). It is not very clear as the rendering you chose might be obscuring the clarity of the image. There were a number of cases similar to yours and I have written more details on those posting regarding this type of issues. One of them is here (Could this be vascular compression? - #7 by KoolDude). This is condition (Carotid artery entrapment by the hyoid bone) is linked to stroke as well so the earlier you attend to it the better. Do you feel pre-syncope (lightheadedness/blackout), Stroke like episodes when you turn your head? It would also be better if you can also post the frontal image so we can see the Hyoid bone clearly.

Cyan arrow points to where I believe the Hyoid Bone is touching one of your Carotid arteries. 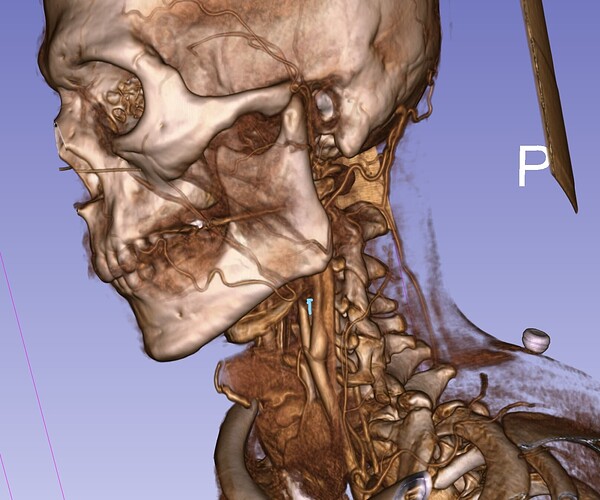 Thanks for that thought, KoolDude! I definitely have the symptoms - syncope and lightheadedness, often worsening when turning my head. Sometimes I black out just turning my head to the side. For a long time I thought it was vertebrobasilar insufficiency. It’s really hard to see the hyoid clearly on these scans. Even the axial view is not very helpful, but I have attached a slice here. I don’t think it ever intersects the ICA/ECA. Will have another look at the 3D tomorrow and see if I can get a better view of it. 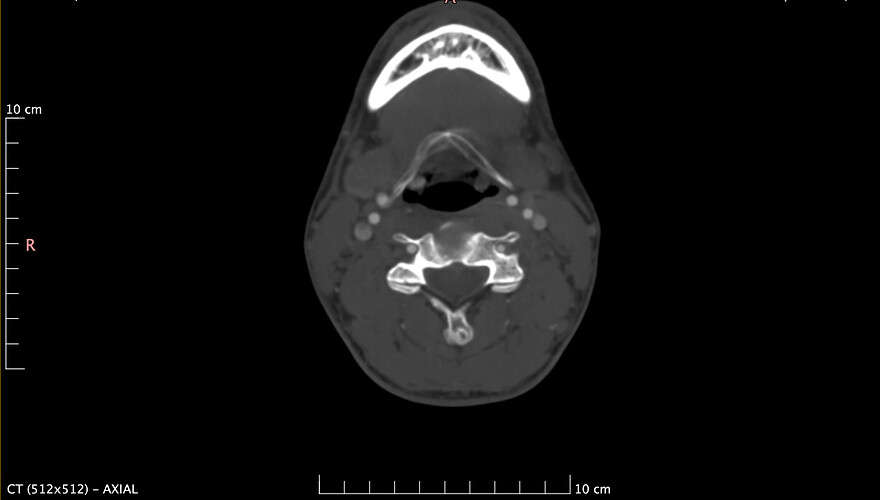 I could be wrong but the orientation (pointed by the cyan arrow) of the left hyoid horn is towards the bifurcation/separation of the carotid arteries and typically it will not be outside but inside as the right hyoid horn is (pointed by the red arrow - suspicious as well as it is nearly touching there.). If you can post a few slices above and below this level, it would be better. Also keep in mind, sometimes you might not see the tip of the hyoid horn if the contrast of CT is not properly adjusted. 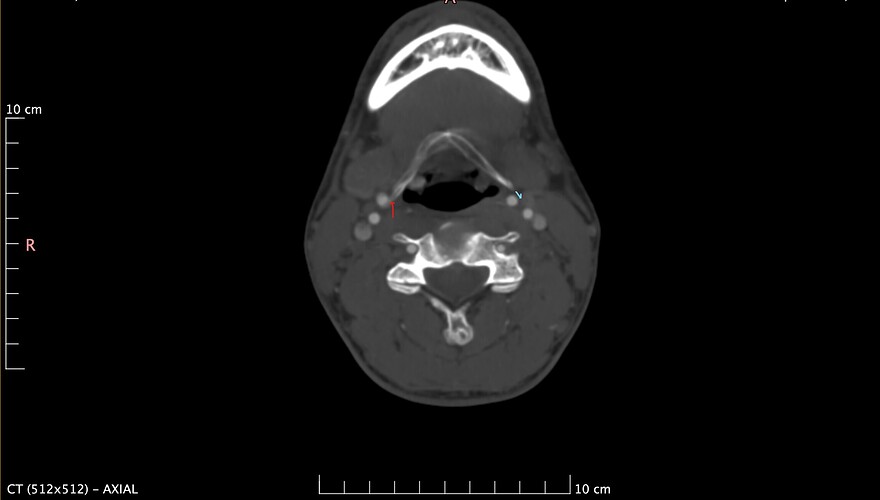 I may be getting somewhere 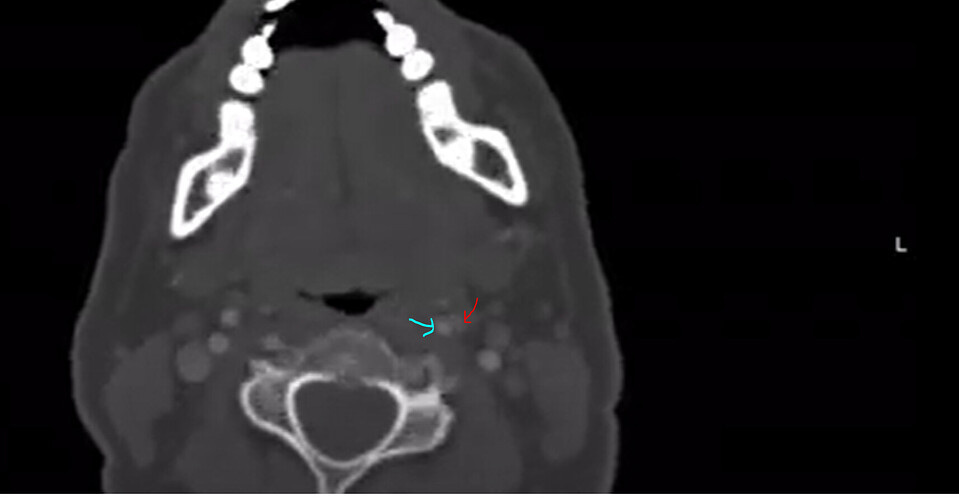 Okay, let me know if this series is more helpful. I can try going more superior but it really does fade quickly past this point. Top photo is most superior: 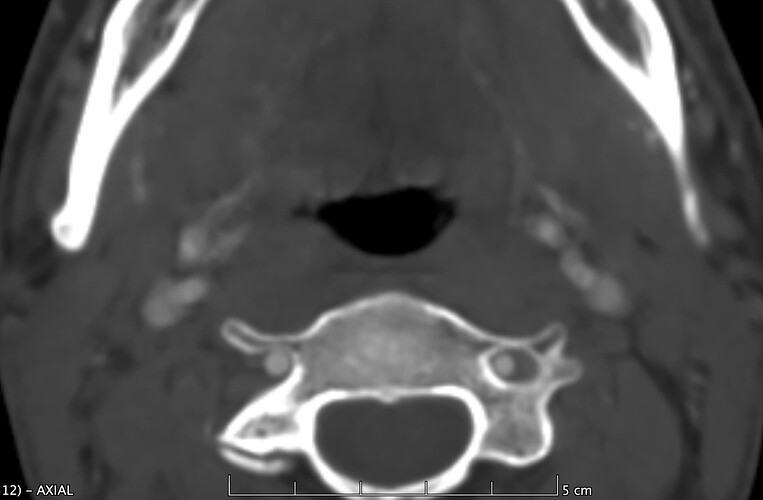 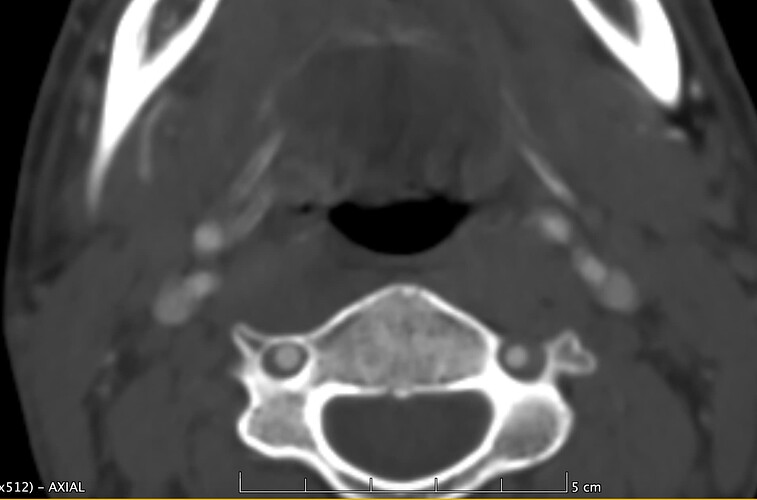 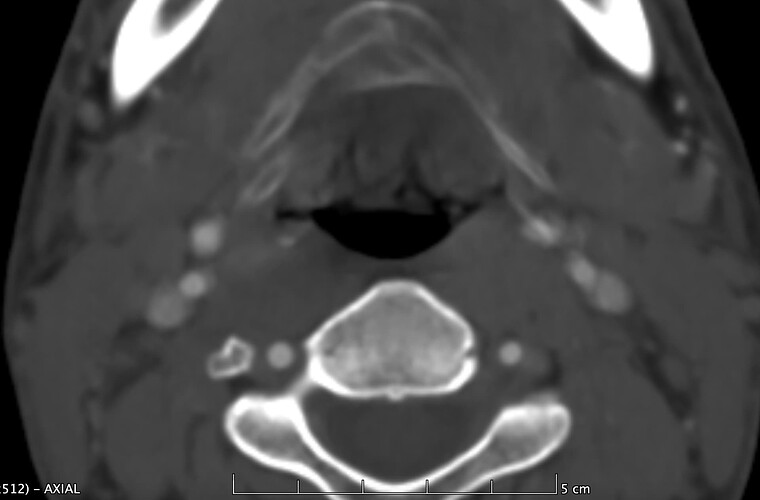 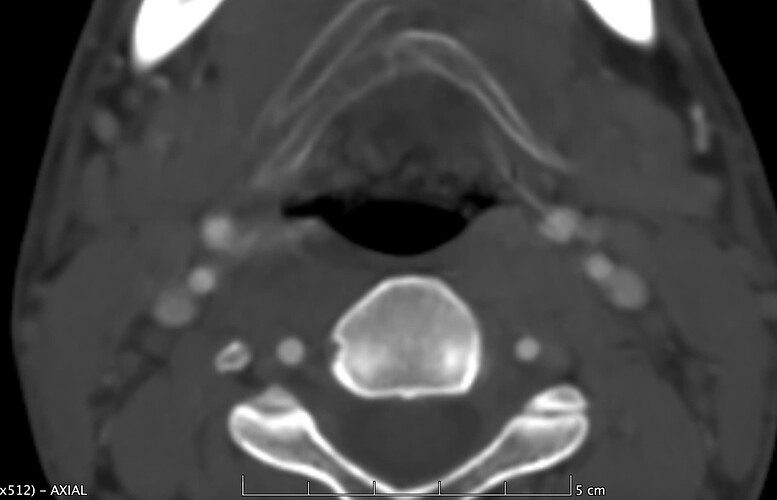 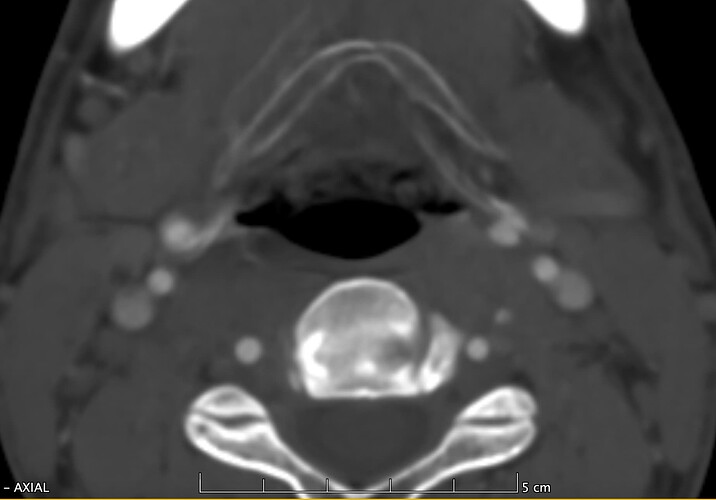 I find this very difficult to interpret, but here are some images from the 3D scan where I tried to isolate the hyoid and carotids. I think you might be onto something here… 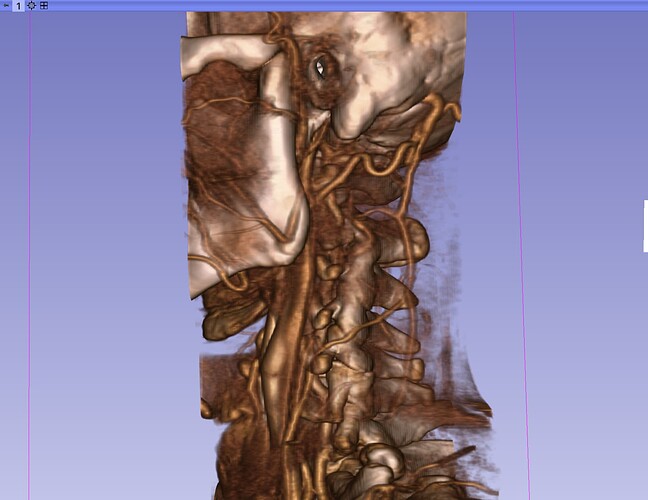 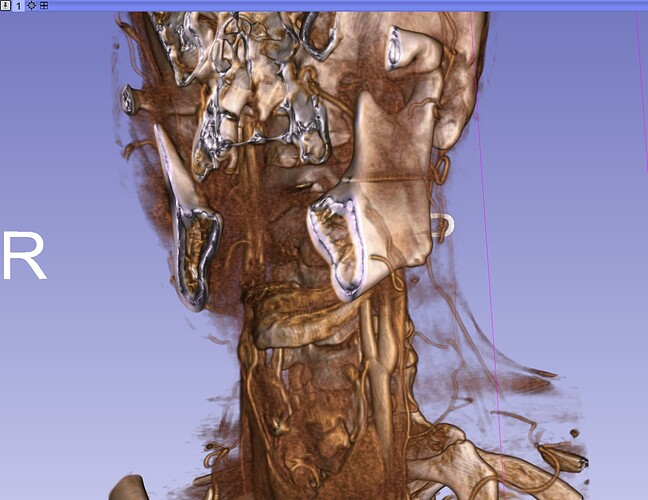 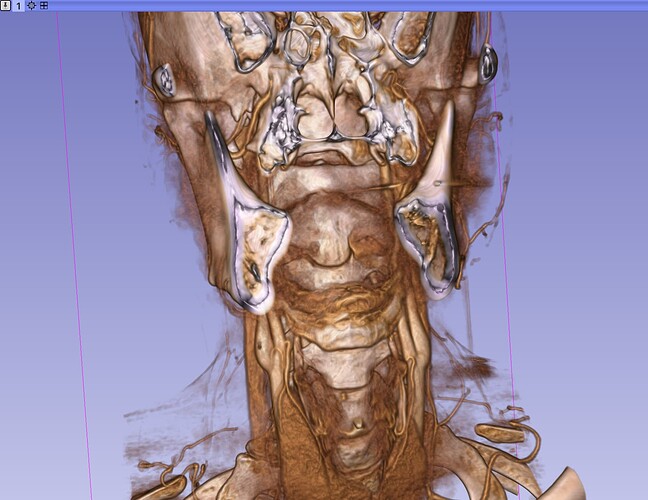 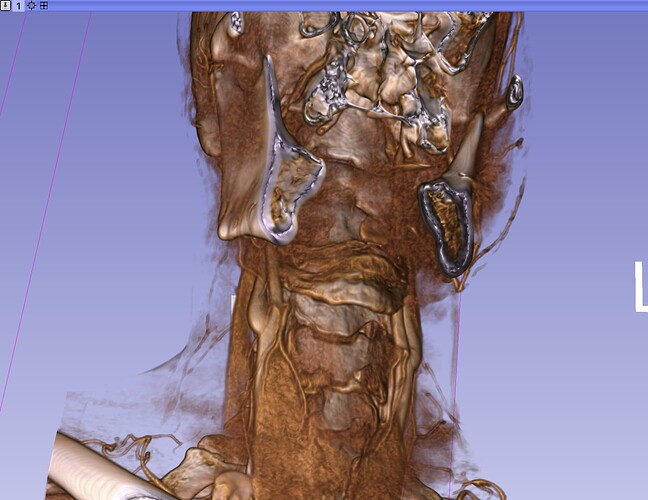 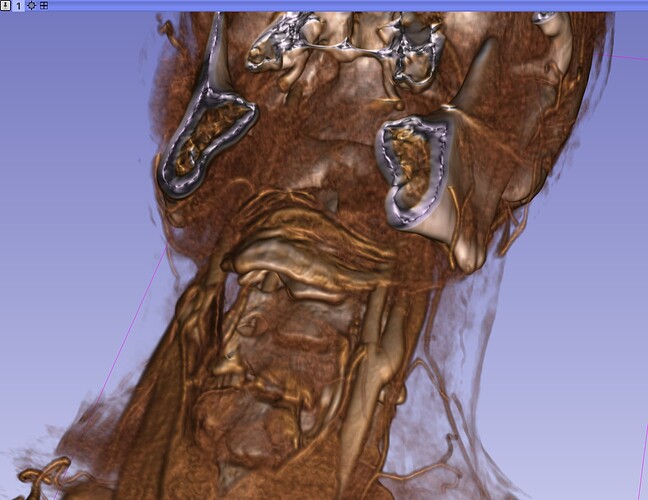 , Yes we can see the compression on the axial image (though some of them were bit blurry but I chose the one I thought was bit better in terms of visibility). We see the left hyoid horn (cyan arrow) resting against your left ECA (red arrow) anteriorly while the other right hyoid horn appears to be suspiciously touching the right ECA interiorly ( look at the different shapes of the ECAs, the left one appears to be oval perhaps induced by the compressing hyoid bone and the right one appears to be somewhat circular so might be touching but not compressing however provocative neck movements could change that). The ICA (yellow arrow) and the Jugular vein (blue arrow) appear to be normal and with no compressions. I think you need to investigate this further with competent ENT as some might ignore it. This could be why you are getting lightheadedness/presyncope.

BTW, I commend your skill in 3D slicer but I find a good quick tutorial that helped me when I joined this blog. You might need to tweak the intensity of the 3D image to remove the tissues and choose a bit clearer rendering so I put a link below to teach you that quickly so you can play around with it to produce more clear 3D images. 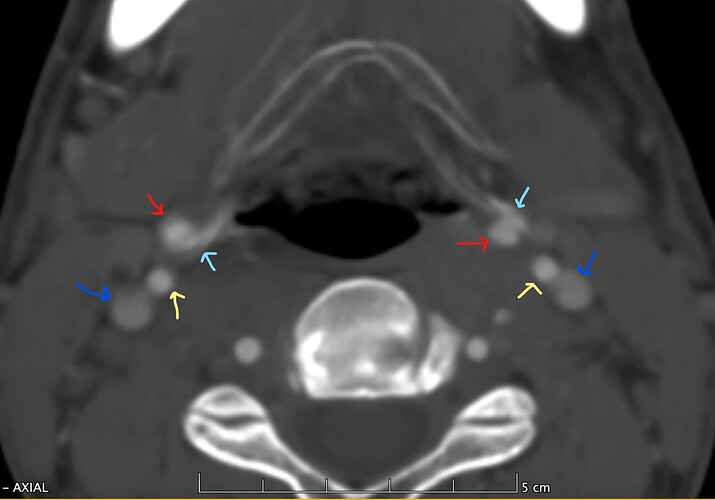 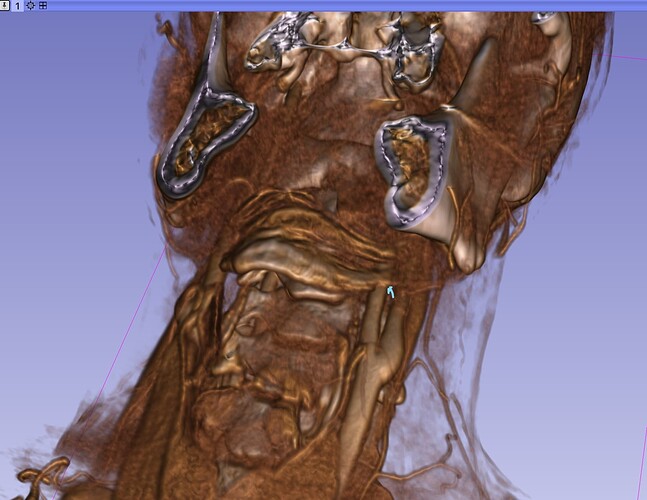 I think you can go to the volume rendering and play around with circled intensity bar to make it more visible and lessen the tissue. See the image below and you can read it the link below on how to do this if you need it. 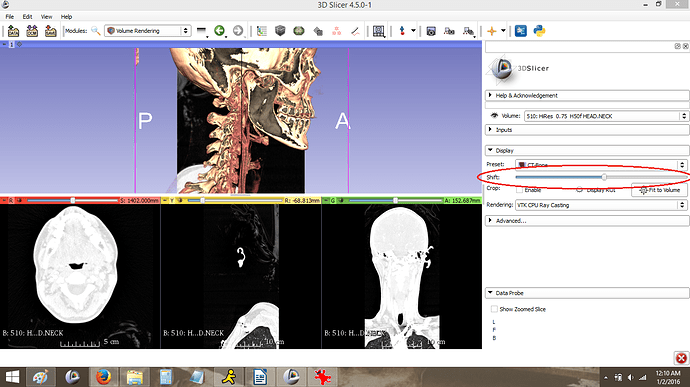 This. Is from step 7 of Making Your Own 3D Images from CT Scan- 3D Sli